Our logo means what is written that is Hellenic paths-Ellinika Monopatia. There is noticeable difference in the two letters of LI (ΛΙ) with the orange color as an outline and the white color.

For those who look back to the beginnings of the Greek language, they will find the first Greek script that was called Grammiki Vita (Linear B).

It was used in the Mycenaean period, from the 17th to the 13th centuries. BC,  mainly for the keeping of records in the palace. Linear B includes 89 syllables representing syllables with vocal value and about 260 ideograms (or logos) that portray concepts such as man, woman, cow, oil, wine, etc., and symbols for rendering numbers.

Although its texts are mostly lists of supplies that come in, come out or are stored in palaces and telegraphic inscriptions, their value as primary sources for the economy, trade, religion, social stratification and administrative organization of the Mycenaean Greece is enormous. Until nowadays, 87% of the texts have been deciphered.
Several efforts have been made so far to interpret the remaining 17 symbols of which their syllable value is not known.
Below is the table of the decrypted symbols of the Greek language and there you will find the syllable LI, which is in the current Greek language the syllable of PI. The hidden PI is the first syllable from: The Pilli=Gate of Hellenic Civilization –Hellenic Paths, which is the full name of our organization. 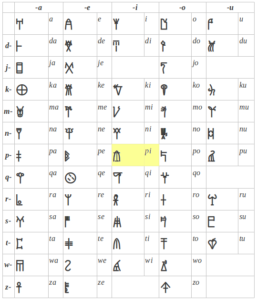 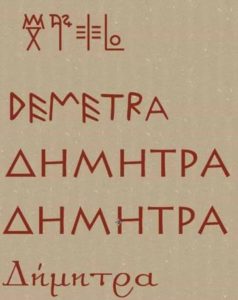 Our purpose, therefore, through the hidden “PI” was to remind you of these primitive Greek symbols of the first Greek script: ‘The linear B’

The white color symbolizes the pure LIGHT from the source of Life who is one and the same God to every one of us with several names and none at the same time.

The name of the Gate of the Greek civilization-Hellenic paths came to our mind first, because everything is a path, a road, a gate and everything has to do with the epicenter of the immortal Greek spirit that still’s evolving…

Finally our slogan:’ Back to our roots’ back to the basics, back to our tradition, history, back to our villages where we, you, grow up or where your grandparents ,parents, relatives, grow up and you want to go back, ‘back to your roots’. Besides is there a tree without roots? Even you are not Greek as a nationality
“Anybody can be a Hellene (Greek), by his heart, his mind, his spirit…” (Socrates)